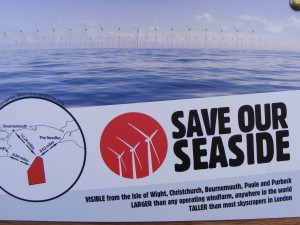 Leaflet available outside the official exhibition

The final Navitus consultation on the proposed wind farm off Bournemouth is about to end.

A Navitus exhibition is touring the Bournemouth area and I called in on Friday to see the information boards at Wick Ferry – on the coast path’s winter route.

Useful information to take away is available and you can request a view of the future on one of the big screens. I looked out from the top of the cliff by Chewton Bunny, from the Bournemouth West Cliff and Durlston Castle.

There is no denying by anyone that the wind farm’s turbines would be seen from the coast path.

The view most affected appears to be from Durlston Castle which on a hot summer day at present has the feel of the south of France.

But at Bournemouth the turbines appear to be more of a cluster on the horizon between the pier and Old Harry.

But the main issue is not just about how we make energy but the importance of the incredible view. The proposals are for different sizes of turbine. If the smaller version is chosen there will be have be a greater number.

In answer to a question at the exhibition I was told that Taddiford Gap, where the cables land, would not be affected by cable laying. However, the printed material does warn of “major-moderate impact to the character of the view and visual amenity during construction”. It does say that they are “reversible”.

There was a demonstration outside the exhibition by opponents.

The exhibition tour continues until Saturday 21 September when it is at Bournemouth’s BIC all day 10am-4pm.