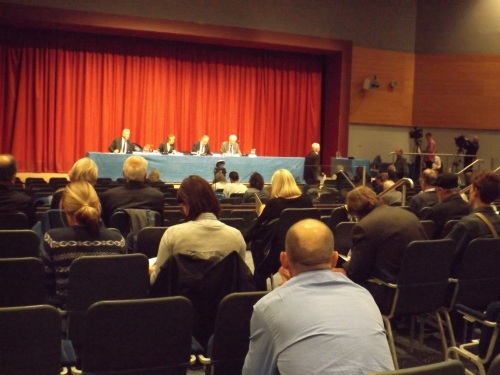 The hearing at the BIC

The Planning Inspectorate held its main hearing for the Navitus Bay wind farm proposal at the BIC in Bournemouth yesterday (14 Oct).

Most of those giving evidence were opposed to the scheme which would place the world’s largest wind farm in the bay between the Isle of Wight and Isle of Purbeck.

But a serious case in favour was given by several individuals concerned about climate change and, in one case, Russia deciding how much power we receive.

The Yarmouth Harbour Master, who lives at Barton-on-Sea, was in favour since the project could make his port very busy,Â bring employment and help local businesses who would provide supplies to the ships.

But there were concerns about noise from the bay during and after construction, noise (or low hum) from cabling bringing the electricity ashore at Taddiford Gap, shipping safety, fishing and migrating birds.

My overwhelming feeling at the end of the day was that the Dorset and Bournemouth Coast Paths which we are so familiar with have unique views loved by many people. Designations by UNESCO and other authorities confirm that we have something precious to be preserved for the future.

If we are to say to people ‘be green and don’t fly to a foreign holiday’ then we must have our bay which rivals Naples for them to enjoy at home.

This is the same landscape and seascape which moved Henry James, Benjamin Disraeli and, as the inspectors were reminded, Bill Bryson.

The Daily Echo has a report.